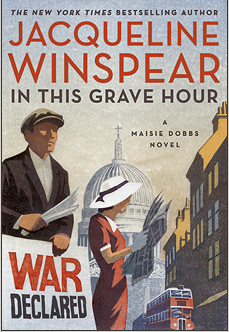 “In this grave hour, perhaps the most fateful in our history, I send to every household of my peoples, both at home and overseas, this message, spoken with the same depth of feeling for each one of you as if I were able to cross your threshold and speak to you myself.  For the second time in the lives of most of us, we are at war. ” — The opening lines of a speech given by King George Vl of England, on the day it was announced that England was at war with Germany. (September 3, 1939)

The 13th novel in the MAISIE DOBB’S series begins with Maisie rushing to the home of her dearest friend Priscillia, so they can listen to the Prime Minister’s announcement on the wireless: war has been declared. This is a time period the British often refer to as the “phoney war”, or Churchill’s term “the twilight war” where nothing much happens on land, involving the Allies,  for about eight months – ( although the seas are a different matter). The children of London are evacuated to country homes and the adults of London must carry gas masks and adhere to strict blackout rules. The initial  chaos contributes to the cases that Maisie must confront since the police force,  and the bureaucrats are overburdened.  Maisie is employed to investigate the murder of a man who was a Belgium refugee in the first war and she also attends to a little girl who is an evacuee with a mysterious background.

Fans of this series will remember that the first novel (MAISIE DOBBS, 2003) began in 1929 with Maisie, also a psychologist, opening her inquiry agency.  Many of the early cases had seeds in the first war and many of the characters were physically or mentally wounded by that war. But there was also healing and new life.  It is therefore terribly heartbreaking that many of the children that offered up hope throughout the series are now eligible to fight in the new war. And here is what separates a series from a stand-alone novel; the reader may become totally invested in the characters in a series. I thought the last book ( JOURNEY TO MUNICH, 2016) was the weakest in the entire collection but I still wanted more Maisie (and friends).

The author manages to convey an overall sense of incredulity among the older characters that there is – indeed – another war.  And some acceptance.  But the younger characters – meaning those who weren’t yet born during the 1st war or those who were too young to remember – often display a sense of excitement.

Overall I felt this was maybe not the best entry in this series – but it was good – and I will look forward to reading about the next chapter in Maisie’s life.